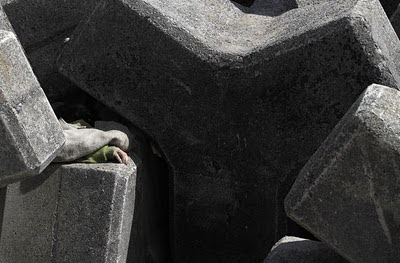 A death toll of more than 18,000, nuclear radiation, shifts in planetary balance, tsunami warnings along the west coast of U.S. and other parts of the world. . .
All this occurred because “The identity of the Japanese people is selfishness. The Japanese people must take advantage of this tsunami as means of washing away their selfish greed. I really do think this is divine punishment” according to Tokyo governor Shintaro Ishihara.
This is a most unwise and unkind statement for the Governor’s own people undergoing an unprecedented natural disaster.
Given that there are also rumblings about how the Japanese people deserve this catastrophe because of their karma (action) of having slaughtered whales, dolphins and other sea creatures, I want to say a little more about the law of cause and effect.
Karma is not a verdict to be slapped on anyone, especially not neighbors in distress. When you see others experiencing difficulty, attempt compassion and know that it is good karma for you to encounter a situation where you may help. Know that better karma will result for you and those in need.
When you experience difficulty, attempt wisdom and accept that, whatever it is you are experiencing is your individual or collective karma and you are now in charge of creating your upcoming karma. Better karma will occur as a result of your assuming complete and total responsibility– mentally, physically and psycho-spiritually– because you are responsible for what is in your future.
Once upon a time, a village decided to burn a woman to death for being an alleged phony and whore. The townspeople watched for signs as they wheel-barreled the outcast, all limbs tied and mouth stuffed shut, to the desolate desert to receive her execution. Along the way, they smell wafts of noxious odor. They sneer at each other, giddy as they tell themselves that their judgment is affirmed by the Almighty. They decimate the said criminal until she is reduced to ashes. Upon returning home, they see their houses burned to the ground, releasing a strong stench as carcasses of their dearly beloved cauterize.
Reading natural or man-made phenomena as signs can border on superstition and can be dangerous, especially if constructed or interpreted by a select few with an agenda. Is it possible that these are divine warnings for us to stop blaming the victim(s) and treat them as sacrificial lambs?
Furthermore, I would not be too quick to judge a situation the result of good or bad karma. In the aftermath of a series of disasters in Japan, there are also heartening stories of heroism and caring for neighbors like “the good old days”.
Karma is a web of cause and effect made up of a complex number of elements including: intention, action and outcome involving thoughts, speech and physical behavior that vary in degree depending on the timing, duration, participant(s), number and size of them etc. (Master Zhizhe‘s Commentaries on the Meanings of the Bodhisattva Precepts). Consequently, karma is not deterministic nor easily determined.
For this reason, leaders and religious institutions must be especially mindful that people are not toys or chess pieces, being enticed or driven according to the propounded interpretation of karma. For the power that be to claim a phenomenon reward or punishment for a specific populations is to demean the intelligence of those individuals, leaving only a bitter taste of condescension behind.
Fortunately, karma can also be simple and empowering. Lest you feel overwhelmed by the troubles of the world and wonder if there is anything else you can do other than make donations, here are a few ways to contribute to a safer and steadier Japan and the earth:
Pick one and do it once every day for seven to 49 days. Tell me what you notice by the end of that period of time.